Leicester: The Metropolis of Dissent by 1848 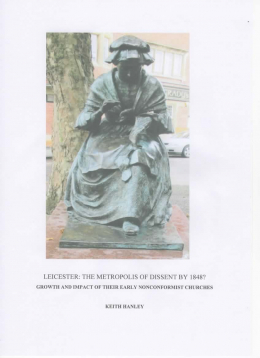 Growth and impact of their early nonconformist churches.In 1848 a Leicester MP described the town as being the Metropolis of Dissent were perpetuated thereafter to describe Leicester\'s growth and its impact from religious denominations, their churches and congregations. The purpose of this book is to determine whether Leicester was justified in this claimed. A comparison between 1787 and 1848 shows there is a substantially disproportionate increase between its nonconformist or dissenting churches compared to those of the conforming Anglican ones. We determine the main causes of this change, the leading individuals and their motivations and characteristics. This was a time of considerable economic upheaval and the hungry 40s generated considerable stresses and stains affecting all aspects of community life: What the hell do we care about reading, if we get nought to eat?. This inequality is addressed through ministers inventions in the manufacturing environment dominated by the hosiery industry where insurance schemes and poor relief were inadequate to resolve the economic hardships. This was fertile ground for Chartism and its reforms as demonstrations moved from peaceful protest to more confrontational demands, Moral force moved towards a more physical one as Chartism and Dissenters shared some common objectives. Contentious religious issues are examined. Church rates, a legal tax to maintain the parish church, were discontinued, the Liberation Society was established to separate the state from religion, and legalised compulsory education by the Anglican Church was prevented. A variety of sources are used including the 1851 Census of Religious Worship, locally written church histories, biographies, autobiographies, and newspaper articles. These are supported by more specific evidences such as baptism registers, church minutes and works from writers of the time and modern historians. An objective analysis of the evidence suggests that while Leicesters claim is unproven its recognition as a metropolis of dissent is justified. Keith Hanley researched and wrote this book as a dissertation for his MA in English Local History and Family History at Leicester University where it was awarded in 2017.Cover: Leicester Seamstress outside Leicesters City Rooms.