Memoirs of a Loughborough Man 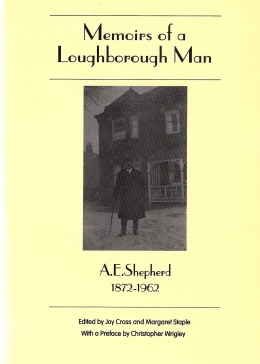 This autobiography of my grandfather, A.E. Shepherd of Loughborough, Leicestershire, 1872-1962, was compiled, edited and transcribed from jottings he made in little notebooks and on old sheets of paper, and from dictated notes and conversations we had during the summer of 1951. lt began while he was in hospital recovering from a serious fracture of his thigh and continued throughout the summer, often in the garden at 'Highcroft' while he impatiently endured enforced inactivity.
His consultant orthopaedic surgeon had told him there was little likelihood that he would ever be able to walk again. He did not know my grandfather, who persisted doggedly until he could walk again, albeit awkwardly and with a stick. He resumed driving his car (to the peril of all!), built a bungalow on land adjoining 'Highcroft' so that he could still enjoy the sighted 'his' rhododendron bushes and roses in the garden next door, and lived, with my grandmother for another ten years.
Margaret L. Staple (nee Barrington)

For the purposes of this book a further editing was necessary, omitting information that did not refer to the Loughborough area. Grandfather took a knowledgeable interest in national events but he was essentially a Loughborough man.
I am indebted to the Leicester Libraries and Information Service for the permission to reproduce several photographs from Bygone Loughborough in Photographs. Every effort has been made to trace the copyright holders.