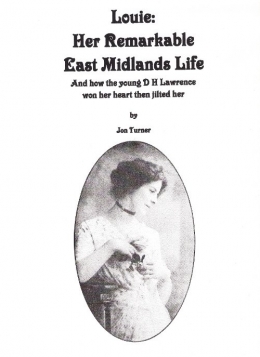 The complete life story of the Derbyshire-born Louise Burrows (1888-1962) who, as an adolescent and in early adulthood, by then living in the Nottinghamshire village of Cossall, was part of the talented social circle of apprentices at the Ilkeston pupil-teacher Centre in Ilkeston, most of whom went on to the new University College in Nottingham to finish their training. At this group's centre was the young D.H. Lawrence. He and Louie were friends for some years before becoming engaged in December 1910, only to split after fourteen months when he unilaterally ended their betrothal.Although they never met again after this, the main legacy of their relationship was three of his poems and the character of Ursula in his novel The Rainbow, said to have been inspired by her.

At this stage the Burrows family had settled in Quorn in Leicestershire, and Louie went on to become a distinguished headmistress in various county junior schools then, finally, The Newry Junior School in Leicester's Southfields area. Soon after her appointment news of Lawrence's death in the Côte-d'Azur in 1930 provoked her epic rail journey across France to Vence to visit his grave.

Although retiring in 1941 to marry Frederick Heath, a wealthy shoe manufacturer, and remaining happily married to him, latterly as one of Rutland's community leaders, and living out her life at the 'big house' in the village of Greetham until her untimely death while on holiday in 1962, she never entirely got over Lawrence, the love of her life.

All this, and her steadfast religious faith and natural compassion, shrewd intelligence, love of artistic and musical beauty, many interests and, it must be said, her foibles and eccentricities are all faithfully and lovingly recreated in this first complete, illustrated and thoroughly-researched biography. It is one of the 20th century's great love-stories.

The Author: Born and raised in the London area, Jon Turner began his working life, after National Service, as a librarian before training then working as a secondary schoolteacher until the mid-1960s, when he moved to the Midlands and finally settled for Pronation work. Having married, and lived in various Midlands cities since the he now describes himself as "a naturalized Midlander". Before retiring in 1996, having gained social science degrees from the Open and Bradford Universities by then, his final twelve years were in the family court welfare service.

Post-retirement, he founded the Derby Chamber Music Sociaty and was its secretary until "retiring" again, after over 60 concerts, in 2006. Having become interested in this book's subject, and finding he then had the space to research and write it, he has now done just that, gaining a greater love of his adopted region in the process. He adds he hopes his abiding love of music, literature, landscape and railways,amoungst many other interests, is self-evident.

Other books about Quorn

Other books about Nottingham