Men With A Vision 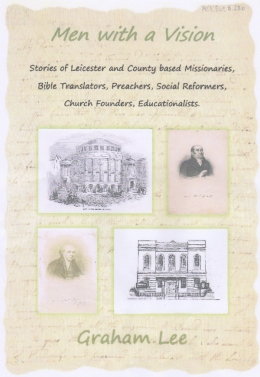 This book was researched and written by Graham Lee, a modem 'Man with a Vision', to tell the exciting story of the development of the non conformist Christian initiatives that took place in Leicester and County in the 17th 18th 19th and 20th centuries.

Graham Lee 1917- 2003, was a Leicester man and attended the Belvoir Street Baptist Church from his youth. It is known as the Pork Pie Chapel and is currently a part of the City Library. During the 39-45 war he had a distinguished Army career and travelled to india and Canada as a Major in the Ordnance Corps.

For most of his working life he ran a large family building company, but much of his leisure time was given with great enthusiasm to Church activities.

On his return from army service Graham was soon appointed Deacon of the United Church on Charles Street and then later Secretary, a post he held with distinction for many years.
He was also appointed as the archivist and increasingly undertook detailed research into all the Church records. This book is the result of his meticulous researches and was completed in 2003.

When William Carey's Cottage was demolished to build the Holiday inn, Graham Lee was instrumental in transferring the Museum housed in the Cottage into one of the vestries at the United Church. The museum is visited by people from all over the world and is open on Sunday mornings after service or access can be arranged through the current archivist Keith Harrison. Details are on the Church web site: www.central-baptist.org.uk .

In 1983 the United Church joined with Victoria Road Church to create the Central Baptist Church and Graham continued as joint secretary for a year before his retirement. He also retired from his Building business in 1986. Hardly a retirement, as it gave more time for his researches! This book then was his vision, to put together the exciting stories of the wonderful non-conformist Christians who were so influential in local, national and international witness to their faith.