The Unicorn in Bradgate Park 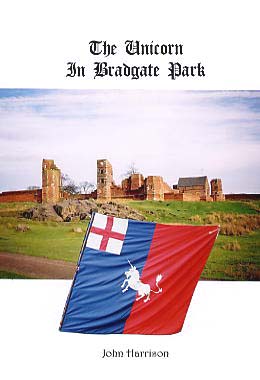 The author has been a member of the Sealed Knot - the Society of Cavaliers and Roundheads - for more than five years, and is public relations officer for Lord Grey's Regiment.

The book tells the story of the short but action packed life of Lord Grey of Bradgate House.

Then continues with the life of Thomas Grey. At only five years old, Thomas became a Lord (of Groby) when his father became an Earl (of Stamford). Only seventy years before Thomas was born, a member of the Grey family had very briefly been Queen of England.

When only 10 or 11 years of age, Thomas and his family received a very important visitor to the house on 9th August 1634 - King Charles I and his wife.

The Young Lord Grey then became an MP at the age of only 17, but on 26th August 1642, times had changed and Thomas Grey's house was attacked by the King's nephew, Prince Rupert and their troublesome neighbour, Henry Hastings of Ashby Castle. The King had declared war at Nottingham Castle days earlier - civil war.

Lord Grey rapidly rose to power and prominence. He took part in numerous local and national battles and skirmishes. He was an outspoken MP, once an ally of Oliver Cromwell but later arrested by him and sent to Windsor Castle.

Lord Grey died in 1657 at the age of only 34. 340 years later, in 1997, a group of Leicestershire historians and re-enactors began to research the life and times of one of Leicestershire's neglected characters and are now bringing Lord Grey's Regiment of Foote back to life and marking the return of the unicorn in the park.