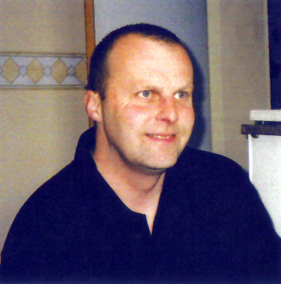 Author and historian John Harrison was born in Kirby Muxloe, Leicestershire, in 1963, almost next door to the 15th century castle, and has now lived in Loughborough for over 13 years after living in various parts of Leicester and a rural village near Melton Mowbray for nine years.

John now has thirteen local history books published by Reprint Books after meeting publisher Dave Dover in 2001. He started writing in 1983 with a punk fanzine and poetry which became lyrics when he was briefly vocalist of a Leicester punk band.

The author's main interest today is the English civil war period with four local history books featuring the period by Reprint. His research into the alleged Leicestershire man who executed King Charles I attracted much local media interest as well as The Daily Mail and appearances on Radio Leicester. The author was a historical re-enactor with the Sealed Knot from 1996 to 2004 travelling around the country camping and re-enacting our history at Stately Homes and castles.

Three books by the author published by Reprint feature Loughborough in particular, while a fourth is planned to be published during 2009 about the Victorian Midland Railway station. John has now worked as a railworker for nineteen years after previously being a postman, archaeologist, museum worker, farmworker, market trader and landscape gardener. The author has travelled around Europe, Ireland, Greece, Turkey, India and Egypt as well as much of England, Wales, Cornwall and Scotland.

Some quotes from the press:

"John Harrison has produced a curious little book … and like a good lawyer, builds quite a circumstantial case."

"Controversial new book, which has the rather grisly title of 'The King's Head' …." Leicester Mercury 18.7.03.

"John takes the mundane world around him and finds historical intrigue, mystery and fascination … the enthusiasm behind the book is infectious and the style chatty, which keeps the reader going." Orders of the Daye. Sealed Knot Society magazine. January 2004.

King Arthur? He's not history is he? He's a myth or a patriotic legend surely?

So how can I as an historian write a book about King Arthur?

Many, many pieces of a jigsaw had to be put together, … [more about book reference 55]

book reference 57": Charles I and the Relics of The King's Head

Following in the footsteps of King Charles I, the author has travelled from rural Leicestershire to Windsor Castle, Oxford, Cambridge and Leeds, amongst other places, to research the mysterious events … [more about book reference 57]

"According to the history books, on 6th December 1745, Bonnie Prince Charlie and his Jacobite army turned back to return to Scotland after reaching as far south … [more about book reference 253]

Many years ago poets and bards would travel the land telling stories of myths and legends, warriors, heroes and heroines.

"Whether you are a resident of Charnwood or a visitor to our town and region we welcome you and hope you find this collection of local history facts and figures, myths and … [more about book reference 280]

book reference 211": Is Leicestershire Unlucky for the Monarchy? A local legend explored

The county of Leicestershire is reputed to be an unlucky county for visiting members of the monarchy, according to local legend, but when did it start? Was it after the death of Richard IIIat Bosworth … [more about book reference 211]

book reference 216": Loughborough and Charnwood: a Quizbook to discover our local history and heritage

A brain-teaser quiz book, with many photos.

book reference 374": Made In Loughborough - The Great Paul Bell

Taylor's Bell Foundry In Loughborough is one of only two remaining in the whole country. In 1881 It cast a 16 ton bell for St Paul's Cathedral In London, known as "Great Paul." Its Journey to London … [more about book reference 374]

The Battle of Willoughby Field took place on July 5th 1648 in Nottinghamshire, close to the Leicestershire border. Royalist soldiers from Pontefract Castle in Yorkshire were on their way south to … [more about book reference 268]