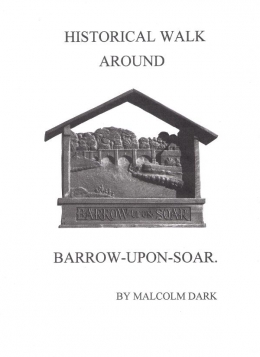 INTRODUCTION.
The following account is not a record of all the events, or of people involved, that have occurred over the entire history of the village. lt is mainly with reference from the late 18th century and links places and events this author has previously recorded in separate accounts.

Readers wishing to know of history prior to that period are recommended to read A Short History of Barrow-Upon-Soar by R.H.Bennett, copies of which are held in the local library. Also suggested are Volumes 1 and 2 ''Bygone Barrow Upon Soar'' by J.&B. Wilford and ''Memories of Barrow upon Soar 1865-1875'' by F.J.Newham as revised by this present author in 2011.

Each location written about is within easy reach of the village centre and the whole route could be undertaken in a leisurely evening stroll by any active walker.

In the first recorded history of the village within the Domesday Book, compiled soon after the conquest of England by William in 1066, we are informed that an early manor house stood on the site of the present Hall Orchard School. This would have been the centre of the village at that time and from there village growth radiated out during the following centuries.
It is important to remember that after the Second World War and by the early 1960s, a number of central roads and streets were renamed. For what purpose is not known to this author except a realisation that due to the new developments in housing and shopping, classification of certain areas needed to be updated and thereby a number of bygone names of streets and localities disappeared.
Where today would we find Back Lane, West End
Cottages, Industry Street and Down Briggs? There are
many others as mentioned in other publications and old maps.
There are no photographs to accompany this text.
The readers are encouraged to walk the route and find the visual aspects for themselves! Although not specifically mentioned, there are fossil replicas placed around the village, most of which lie within the walk. If readers are further interested there are copies of the Fossil Trail in the Library and the Council offices.
Enjoy your walk, learn more about your village and appreciate the history that surrounds you.