Eight Ounces Of Gold: The story of Birstall, a Leicestershire peasant village 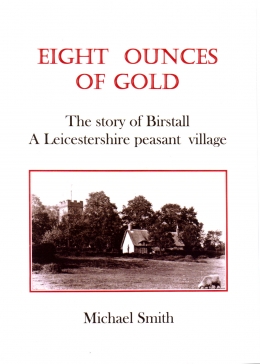 This is an in-depth story of Birstall, with many photos.

"Before the last war, in the mid nineteen thirties, my friends and I who lived in Birstall had the countryside on our door step. Over the brow of Wanlip Lane hill lay open fields all the way to Wanlip with its summer lure of harvest time and exciting horse drawn machinery. On the other side of the village at the top of Beechfield Avenue you only had to cross the main road and wander up Vinegar Hill footpath to find ponds and spinneys with marvellous climbing trees. Opposite my home on Sibson Road was the old village cricket field, cut across there and you came to an orchard and further on Meadow Lane which led to the village tip. Here Snap Green, the village ratcatcher, with his dog Nip provided fine Saturday afternoon entertainment and if, perchance, Birstall St. James football team were playing in the next field you had a double bill for nothing. Even at school we had rural pleasures, for at playtime in the school on School Lane we could lean over the wall and watch the shearers smoothly manipulating their hand clippers around the bodies of the compliant sheep. All of these diversions came to hand so naturally that we never doubted our right to avail ourselves of their accessibility. We took for granted our small comfortable village and the countrymen who lived amongst us earning their daily bread in the neat fields.

"We also had the the big houses, Goscote Hall, Wanlip Hall, Wanlip Rectory and The Lawn as part of our childhood. In the twenties and thirties they, one by one, lost their grand owners and were either awaiting new tenants (who certainly would NOT be gentry), or stood semi derelict and deserted. Whatever their future they were a bonus for they provided additional playgrounds, I do not know what gave us the greatest fun, racketing around the broken, peeling interiors or playing hide and seek and building dens in the overgrown formal gardens. What I do know is that we deeply resented the demolition men when they arrived.

"We accepted and enjoyed our semi-rural village and never questioned it, why should we? We were children and lived only for today, yesterday which was never more than twenty four hours back was dead and gone. Why seek a reason for those neatly arranged fields? Why wonder about the pedigrees of the families who had worked in them for centuries? What possible reason could we have to be interested in those who built the big houses? It was quite beyond us even to acknowledge that such questions existed. So to delve back further and question the very origins of the village would have been absurd, as absurd as it would have been for us to appreciate that we were witnessing the death throes of a two thousand year old English institution.

"This book is my attempt to make amends for that unquestioning childhood. I offer no apology for its parochialism (which a historian recently referred to as 'the great pitfall of much local historical writing.') It is no academic treatise such as Professor Hoskins wrote on Wigston, nor is it a detailed village portrait relying on comprehensive village records, like 'The Common Stream', that fond portrait of Foxton in Cambridgeshire by Rowland Parker, It is simply the product of the pleasure derived by a Birstall lad ferreting about in that exciting historical cornucopia the Leicestershire Record Office at Wigston in an attempt to answer just a few of those questions unasked sixty years ago."