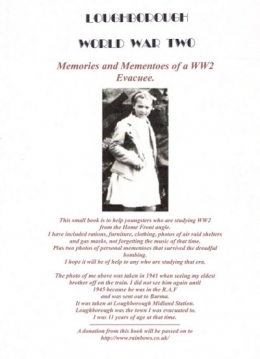 I have put this small book together to help children with their WW2 history in the hopes that it will help them understand how children lived during the dreadful years of WW2.

I lived in London when war was declared and the blitz started on the 7th of September 1940 and went on till May 1941.
It was 76 nights of continual bombing and more that 20,000 people were killed in London alone apart from many more in other cities.
I and my family was fortunate enough to come through that living nightmare alive although we were bombed out twice.


I was evacuated to Loughborough just after my 11th birthday and went to school in an old Baptist Church in King Street Loughborough that was passed over to educate the evacuees.

I was taught to knit at school and we were making balaclavas and mittens to send to the troops to help keep them warm.

Wool became so scarce during the war we had to unravel old jumpers and cardigans to re-use after it had been wound in hanks and washed.

I had three years at that makeshift school and the leaving age then was 14.
I left to start work just before D-Day which was the beginning of the end of this dreadful war.

My character reference was a written letter from the Head mistress of that time which I have included in this book more or less to show how things have altered over the years.

I have put together in this book a selection of various readings that take in the rationing and recipes plus other items that I hope will be of use to those who are interested in this era.

I have included a few poems that relate to the war years which all tell a tale of that particular time.

Writing poetry about the war years helped me to come to terms with the trauma of those years.

A donation from this book will be passed on to http://www.rainbows.co.uk/