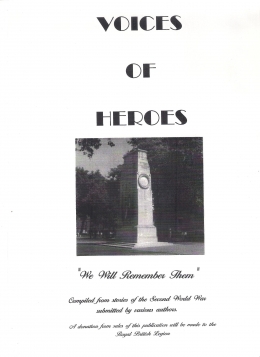 "We will remember them"

Compiled from stories of the Second World War submitted by various authors.
A donation from sales of this publication will be made to the Royal British Legion.

FOREWORD
THEIRS IS THE GLORY.

As I am now 82 years old I have decided to have the WW2 veteran stories from my website put into a book form for those who are interested in those far off years. I have just used the stories from the British side of WW2 because I would like any proceeds donated to the Royal British Legion.

It has been an honour to have had this mixture of tales sent to me either by the serviceman/woman themselves or by a relative. Tales laced with humour and sadness that occur during times like these.

I think those who sent the tales to me would approve of me doing this because there are still many folks who like to read a book. Some sadly have passed on but their memory will still be with us in the tales that this book holds.