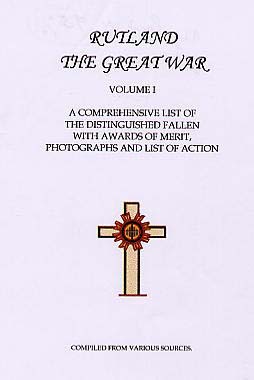 A comprehensive list of the distinguished fallen of Rutland with awards of Merit, Photographs and list of actions.

This is an extract from the book:

SMITH, Pte. Bryan, of Barleythorpe, 2nd Batt. Coldstream Guards, whose widow, Mrs. Clara Smith and one child live at 346 Croft Road, Stockingford, Nuneaton, was born at Welham, Leicestershire, November 12th, 1889. He was a butcher's assistant before enlisting on the 25th August, 1916. He went to France on the 30th January, 1917, and was killed in action at Cambrai on the 30th November. He is buried in the New British Cemetery, Gouzeaucourt. Pl. xi.

SMITH, Serg. Charles, Military Medallist, Leicestershire Regt., was born at Whitwell on the 26th December, 1893, son of Mr. and Mrs. Jeremiah Smith of Buswick Lodge, Cottesmore, and from the age of two until he was nineteen he was brought up by his grandmother, Mrs. Lucy Naylor of Preston. He was a railway porter up to enlisting on the first day of the war, August 4th, 1914. On December 4th he was made lance-corporal and corporal on the 20th, and promoted to rank of sergeant on February 7th, 1916. He went to France on May 4th, 1915, and was awarded the M.M. for bravery in the field. He was killed by a shell on the 28th June, 1917, and is buried in Philosophe British Cemetery, Vermelles. Pl. xiii.

SMITH, Pte. David, 11th Batt. King's Own Royal Lancaster Regt., was a twin son of Mr. and Mrs. Win. Smith, of Ryhall, where he was born on the 28th May, 1898. He was engaged in agriculture up to the time of his enlistment on the 14th September, 1916, in the Leicestershire Regt. He went to France on the 23rd December the same year, and was later attached to the K.O.R. Lancaster Regt. as a sniper. He was killed on the 25th November, 1917, at Graincourt, Cambrai, a letter from an N.C.O. of the same regiment stating that he was killed instantly by the bursting of a shell while he was carrying a message to the firing line-a duty he had undertaken voluntarily during what was his term of rest. The writer added that Pte. Smith was always a "cheery boy," and died a hero's death. A memorial service for the deceased was held in Ryhall Church. Pl. xx.

SMITH, Pte. Jeremiah, son of Mr. and Mrs. J. Smith of Buswick Lodge, Cottesmore, enlisted in the R.G.A. May 24th, 1914. He was in the 62nd Battery, 3rd Brigade, 28th Division, and was drafted to France in January, 1915, where he was engaged in the fighting until the following December, when he went to Salonica, and remained there until the end of hostilities. He was returning to England on leave, when he was admitted to a Military hospital somewhere in France, suffering from appendicitis on January 17th, 1919, and passed away on the 29th of the same month. He was buried in the British Military Cemetery, near the hospital. Age 26. Pl. i.

SMITH, Gunner John Charles, Royal Field Artillery, son of Mr. Win. Smith, Langham, was born on the 14th February, 1895, and engaged in farming before enlisting on the 17th May, 1916. He went out to France on the 9th November following, and his death took place on the 3rd October, 1917, in St. John's Hospital, Etaples, from gun-shot wounds in his thigh. His sergeant described him as "a good lad, honoured and respected by both officers and men." Pl. xi.

SMITH, Pte. Leonard, son of Mrs. B. Smith of Park Lane, Oakham, was born there in July, 1894. He was a member of the Territorials before the war, and joined the 10th Leicesters, but did not go abroad, as he was attacked by consumption in 1916. He died and was buried at Oakham. Pl. xix.

SMITH, Gunner Percy Albert, 160th Howitzer Brigade, R.F.A., was the son of Mrs. Emma Wright of Langham, and was born on November 2nd, 1890. He was a member of the Leicestershire Constabulary, and was transferred from headquarters at Leicester, to Oadby, in August, 1914. He joined the Army in June, 1915 and went out to France January, 1916, being killed in action 11th August the same year on the Somme. He was buried at Beaucourt Wood Cemetery in France. Another of his Police comrades was badly injured at the same time and died next day. The Oadby Urban Council passed a vote of sympathy with Gunner Smith's mother, and the chief constable of Leicestershire (Mr. E. Holmes), also expressed his condolences with her, and said her son, while in the Police Force, won the respect of all who knew him. Pl. xi.

SMITH Serg. William son of Mr. and Mrs. J. Smith, of Buswick Lodge, Cottesmore, was born at Exton, July 19th, 1875. He joined the Royal Field Artillery in July, 1893, and was drafted to France in August, 1914, where he took part, for nearly three years, in the strenuous fighting. He was wounded by a shell and died in Glasgow Military Hospital in July, 1917. He leaves a widow. Pl. i.

This Volume also contains many Photographs

Other books about Rutland