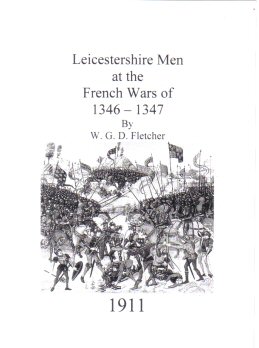 The documents stored in the Public Record Office contain a mass of information relative to many important historical events, much of which is as yet unpublished. The French Wars carried on by King Edward III, when he invaded Normandy in 1346, in order to assert his claim to the throne of France, including the battle of Crecy and the siege of Calais, are not the least interesting of these.

In this paper I purpose to point out the part taken by Leicestershire men in these Wars. In the Public Record Office are preserved the French Rolls, the Norman Rolls, the Calais Rolls and the Memoranda Rolls, which contain the names of a large number of Knights, Esquires, and others who served with the King in France in 1346 and 1347; and in the College of Arms are the Accounts of Walter de Wetewang, the Treasurer of the Household, which give the names of the Earls, Bannerets, and Knights present at the siege of Calais. Most of these documents have been very carefully abstracted by Major-General Wrottesley, and from them it is easy to ascertain the names of many of the Leicestershire men who fought at Crecy and were engaged in the siege of Calais. I must own my indebtedness to Major-General Wrottesleys' researches for much of what is here given.