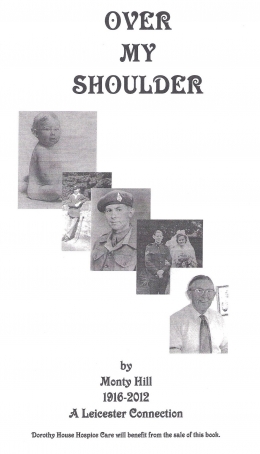 The twentieth century commenced with some quite dramatic event.
There was the death of Queen Victoria, the short reign of King Edward VII, who died in 1910, and after the Coronation of King George V, in 1911, came the First World War, with the useless slaughter of so many young men. This lasted for four years, from 1914 to 1918, and it was during this time that I was born.
According to Entry Number 137 in the Register Book of Births Number
32a, for the Sub-District of Brixton in the County of London, I was born on 27th September, 1916, at 5a, Cambria Road, Camberwell and named Montague Hedges Hill. My parent were William Horace Hill and Barbara Mice Hill, formerly Stoker. I was diagnosed as a boy and my father described as a dairyman.
My earliest recollection of my home, which was also the dairy premises, was a box-like exterior built of bricks, new and neat-looking in comparison with the other houses in the road.
Entering the house from a central main door, you were faced with the staircase and hall.
On the left behind the hall was the shop and, on the right, the sitting room or lounge. In this room was a fireplace set at an angle between the left and back walls. Above the fireplace was a huge mirror with various shelves decorated with the usual items of crockery. We also boasted a piano, gramophone and a wireless set operated by a Cat's Whisker. The Whisker which was a fine contact wire had to be connected to the Cat's Eye to produce sound through a set of ear-phones. Considerable time and expertise was necessary to connect the two before the triumphant moment when the sound came through. The piano, believe it or not, was bought for me and I reached a reasonable standard of play before giving it us as it clashing with my sport.
Moving up the stairs, near the upper floor, was a landing and then about four or five steps, each way, led to the four upstairs rooms. The left front bedroom belonged to my parents whilst I had the rear left bedroom which, later on, I had to share with a new young brother, David. My elder brother, Maurice, always the apple of my father's eye, occupied the front right bedroom. The right back room was a bathroom. A toilet was squeezed in between my parent's room and my room.
Moving down the hall, you came to a passageway which crossed the house with a storeroom to the right and. to the left, behind the shop lay a kitchen-cum-dining room. At the end of the passageway to the left was a door which opened out into a side alley within our premises.
On entering the kitchen, one beheld on the left, a large black stove, stretched half the length of the room and, at its side, an ample sink and draining board area. A window at the back looked out onto a single- storied bottling and pasteurising plant building over which could be seen the upper branches of an enormous and beautiful lilac tree. The blossom, at times, was a sight to behold. On the right of the kitchen was a built-in sideboard in which was stacked a large collection of plates, cups, saucersand crockery of all shapes and sizes. In the centre of the room stood a magnificent mahogany extending table with chairs to match, all good Victorian ware.
A rather large wicker basket lay on the floor under the window which was the bed for our dog, Blackie, a black Cocker Spaniel, and above this hung a cage in which were two colourful budgerigars. At times they were allowed to fly free around the kitchen.
The shop, at the front, contained a counter and once and a large window space in which stood two giant china swans within which were displayed numerous eggs for sale. On the counter lay a casement where cakes for sale were kept.
On the left of the house, from the front was an entry, quite wide, which led to the rear area. Here was housed, in a fairly large building, the machinery for pasturising, cooling and bottling the milk, which I have previously mentioned. Next to this was another building where the rounds-men kept their milk barrows.
The milk arrived early each morning, about 4.00 am. as it had to be processed and bottled before delivery by the milkmen who made two deliveries dally. My father employed four rounds-men - Charlie, Harry, Victor and Mick as well as an assistant in the shop who also acted as a book-keeper, a Mrs Crittle.
This then was the home where I spent my childhood and formative years until I was a teenager.
The situation of our home was very convenient for me, especially, in my teenage years. At the bottom of our road, Cambria Road, one came to the main thoroughfare which ran between Brixton and Camberwell, known as Loughborough Junction with its railway station and numerous shops. Here, were various bus and tram services which, one way, ran to Victoria, the city and the West End and the other way would take you to Brixton Streatham and the Crystal Palace. Turning the other way at our home, the road led under a railway bridge and on to Ruskin Park and Denmark Hill Railway Station whilst, in another direction lay Dulwich and its park.