Out Of The Ashes Of Leicester 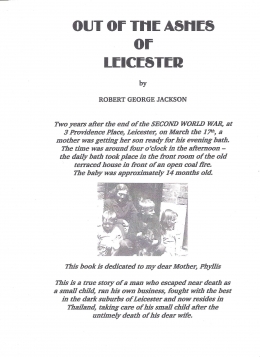 Introduction
Two years after the end of the second world war. At three, Providence Place Leicester on March the 17th a mother was getting her son ready for his bath. The time was around four o'clock in the afternoon The daily bath took place in the front room of the old terraced house in front of an open coal fire The baby was approximately 14 months old.
After washing the baby, she laid him on a dry towel and went into the kitchen to get talc to dry him off. Now this little lad had already been walking and was very active for his age. So, he rolled over onto his front side and crawled to the fire. He then stood up and tumbled into it face first, also trapping his right hand in the fire His mother returned to the room to find her son lying helpless on the fire, she rushed to his aid screaming and pulled him off the fire ''Brian!'' she screamed several times. Brian was her eldest son by a previous marriage and he'd heard her the first time as he was already on his way down the stairs He gasped in horror at the sight that greeted him.
''Fetch your dad from the pub! Quick!" his mum shouted as she wiped tears from her eyes. The pub was across the street and Brian was back in a flash with his dad and half the pub. When his dad saw the baby, he couldn't believe his eyes. A friend asked in a shout, ''Is he dead" With tears steaming down her face, the baby's mother screamed, ''No, he's not dead!'' "I will get the car. Put a blanket around him! We have to get him to the Royal hospital as quick as possible!'' said the baby's father. The car pulled up and mother and baby got in. The baby's father jumped out and had a friend drive. Away they went at high speed with headlights flashing.
From the backseat, the father asked how had had it happened. The nearly hysterical mother explained, "I went in the kitchen,'' she then broke down, clutching her son. ''Can't you drive any faster please!" she screamed through her tears. She kept repeating to her baby, We're nearly there. We're nearly there."
A crowd had gathered at the entrance to the emergency room as the car pulled up and the doctors, nurses and porters were already waiting. In seconds the lad was on a the mother and father sat in the waiting room and after what respirator.
seemed like an hour, a doctor finally appeared.
''Is he going to be all right, please?'' the mother begged.
The doctor took hold of her hand and sort of caressed it. He asked, "Mrs. Jackson, has your son been baptized?'' ''No! Oh please, no!'' his mother cried. ''Can we see him?" she then inquired. The doctor nodded and took her to her baby.
There she saw her son's head was completely bandaged with only holes for his eyes and mouth. His hand was completely covered and there were tubes everywhere. His dad went outside and sat down shaking his head and for the first time someone saw tears fall from his eyes, although he was not crying.
A priest was found and the mother and father watched as the priest said the words the mother would never forget: "I baptiZe you in the name of the father, the son, and the holy ghost. The priest then made the sign of the cross on the child's forehead. His mother collapsed on the floor.
The doctor had said that they couldn't do any more and the baby was now in the Lord's hands. By being baptized he could enter the Kingdom of Heaven.
Without baptism it is of course Christian belief that this cannot happen. After three more hours the father kissed his wife on the forehead and whispered. ''He will be ok" and left her there so he could go home to look after the other children of the family.
The mother stayed at the baby's side for six days and eventually the doctors told her that the baby would survive, but he would be scarred for a long time. The baby was returned to his parents after about three months in hospital. He was taken home to be with his brothers and sister.
You see, that baby was me, Robert George Jackson, and I would like to tell you my story....

Three Providence Place Leicester
Leicester is a city in the middle of England that is famous for Garry Lineker, Belgrave Road, (the curry mile) known by that name because every other shop is an Indian curry restaurant. Also, the Leicester Crazy gang, Walker's Crisps who have built a great big factory on the old city farms, my old hunting ground Cardinal Wolsey who is buried in the Abbey Park and the birth peace of Thomas Cook the travel agents.
Ivan Marks, the coarse fisherman and a gentleman now deceased was from there. I think St. Peter was having a hard time catching fish and needed some help.
Not forgetting Richard the Third, who was defeated and killed at the Battle of Bosworth and they say his body was thrown in to the river Soar off West Bridge in Leicester.
The area of Providence Place was known as Wharf Street, which was well known for the birth of the 'Elephant Man, John Merrick,' Hiller's the butcher shop, and Sue Townsend the author of the Secret Diary of Adrian Mole. And not forgetting Lady Jane Grey who was the Queen of England before being beheaded in the Tower of London aged 17 years. She lived in what is now Bradgate Park in Leicestershire and was the shortest reigning Queen of England which was for, I think, six days.
Nearly all the streets were made of cobblestones and the street lights were powered by gas. All the streets looked the same and they ran in different directions with rows of terraced houses running all the way down one side of the street and back up the other. There was an entry to the backyards every ten houses or so.
Those yards were very much alike with a couple of cold water taps for those who wished to shower.
We had a Mr. Wright in our yard. He would shower in the coldest of weather. I recall he was a big man with big muscles. My dad told me he was a conscientious objector and all the men in our yard hated him. Any disputes in this area were settled in the street. The men would take their shirts off and fight it out, and then shake hands; foul language was the norm and this was one tough place to be brought up.
There was one time when the Withers' had a fall out with another family. This was settled on the street. The headline in the Mercury, our local paper, that night was, 'The Battle of Providence Place.' The council during the war had a letter signed to say thanks to Hitler if he ever happened to drop any bombs around there. But I liked it. It was home and better than nothing.
However, one thing that did always stick out in my mind was the thick black smoke coming out of the chimneys when it was cold. I remember my mum burning
old shoes. It looked horrible even to me and the area was a haven for rats, fleas, and bed bugs

CONTENTS
Introduction
Three Providence Place, Leicester
family
Early Days
Cristow Street Infant School
The Morsey Tunnel
Ten Milk Tops Do Not Make A Penny
Cannon Ball George
The Ghost of Tin Ribs
Taylor Street Junior School
The Big Move - A New Beginning
Woodstock Junior and Infant School
John Laing Versus Kids
My Pal Jack
A White Blackbird and Mouse Eggs
Hello - Hello
Couch, Please
The Ghost Train
The Boys Brigade
Christmas 1956 - A New bike
Beaumont Leys Senior School
Run For Your Life
Protection is Sweet
Bonfire Night - The Big Bang
The Ungrateful Gull
Goliath Versus George
The Teddy Boys Picnic
The Games/olympic Tricks
The Gang Hut: ''Get Bordolie'' ''Skegness So Boring''
The Great Co-op Van Robbery
To Cross Or Not To Cross
As Free As A Bird
The ''Milk Top'' Episode
Spot On
The Paper (Boy George) Suddenly ''Weightless''
The Secret of Eternal Youth
To Cheat Or Not To Cheat - That is The Question
Little Weed
The Beaumont Butcher
To Find A Job
The Lovely Madge
The Slaughterhouse
The Coliseum - November 1963
My New Beadle Coat
Ill Take You Home again Kathleen
The Three Deuces
Tomatoes, Lovely Tomatoes
The Bravest Thing I Never Did
Once Upon A Time There Were Five Little Pigs - And There Still Are
Holy Night is Not AII Right
Hey, What's Up Doc?
Run Rabbit Run
George 'Astaire'
The Wager And The Devil
Coalville: West End Working Men's Club
''Here You Are Then - Even Better Tomatoes''
The Army Game
Creosote or What?
The Gospel According To Tiddy
The china Doll/Tea And Whiskey
Underneath The Arches at Blackpool
Jealousy Get You Nowhere
Hell's Bells
The African Violet Mini
Game On Or Bacon
Teddy Black And The Curry
The Crazy Gang - First Encounter
The Time And Place
The Fancy Dress Night
Mad Martin And The Roof
Bernie's Inn - George Is Out
Captain Jackson
What The Hell Was That?
Oh, I Do Like To Be Beside The Seaside
Viva La Espana
Life Or Death
Oh, No, Danny Boy
Broken Bottles And A Broken Back
What Was That Noise?
Rocket Fuel
The Odd Couple
The Watch, The Cell And The House Brick
The Leicester Crazy Gang
The Happy Horses
Matlock And Jackson - The Chemists
The Big Lads Versus The Chanterelles
The Tote And Hang Them High
The Blonde Bombshell
Horses Don't Do This
The Battle Of The Beaumont WM Club
The White Russian
Leave The Dog Alone - It Bites
The Mauler - Hey!
Poaching Wild Ducks At The Farms
George, The Committeeman
The Jowett Javelin
The Origins Of Chuck
Smash And Grab What?
Wonder If She's Looking At Me?
Meet The Family
Sometimes You're Up And Sometimes You're Down
Fancy Getting Married
Are You Sure This One Is Mine?
‘Cyclone's’ Weston
Tomatoes In The Greenhouse And Marrows Outside
Joe.....Rest In Peace
Emma And The Seasickness Pills
Home And do
Time To Expand
The Football Dinner And Dance
The Morris 1100
Lollypop James
Working For The Council
Father Passes
The Georgie
The End of Married Life
The Gamekeeper's Birthday
Was He The Black Pad Pervert?
The Worst Moment Of My Life
The Coarse Angler
The Fly Fisherman
The Sea Fisherman
The Shooing Man
The Gentlemen's Shoots
The Mysterious Case Of The Vanishing Lingerie
''Can't Take It, Hey?" - The Bakewells
Sticking Up For Home And Dry
Leicester City Blue Army
A Blast From The Past
The Bowl Turner's Arms
That Game Called Golf
New Club: Forest Hills, Botcheston
The Ping World Pro-Am
Thailand Holiday
The Tax Bill And The Retention