Back to the 1940s in Melton Mowbray 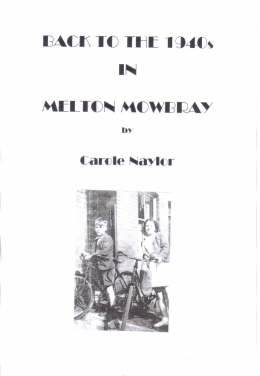 A fascinating account of life in Melton in the 1940s. Taken from the Foreword:

"Since my article on the war years appeared in the newspaper in February 2006, I have received some very interesting and touching letters and e-mails.

"Some of the people who wrote remembered me from when I lived in Stanley Street; another recalled the time we spent in the Girl Guides and yet another, from later on when I used to work at the Melton Times. Some people didn't know me at all, like the fellow who used to live at the Polish refugee camp on the aerodrome. Some remembered Mrs Allen's shop in Norman Street or knew my brothers or sisters. For everyone, the article stirred memories and those memories and experiences they shared with me.

"Those days are gone. 1 am both sad and relieved. Sad that the struggles and hardships that must have prevailed during those years for so many people, went unrealised by me. Relieved that I was only a child and was spared the agony and fear of those unsettled years.

"For those of us who lived in Stanley Street, Egerton Road and Snow Hill, and, as I suspected, for most other families in all the other streets, it was a time like no other. We were old enough to read the newspapers and to understand and distinguish between the good and bad news. Our lives followed a regular pattern. Monday was always washday and Sunday was always wearing our Sunday best, Sunday dinner and afternoon walks.

"Primary School was a testing ground to see if we would go to the Grammar School or the Secondary Modern School and we took this time in our lives pretty seriously.

"I suppose the seeds of writing "Back to the 1940s" were planted when I went back to Melton in 1998 for a school re-union. All the streets, as I remembered them were gone. The familiar buildings around Norman Street, and Bentley Street areas were no more. They had been replaced with blocks of flats, but, in my mind, everything was as it had been before. The more I dwelt on it, the more I remembered and I wanted, so much, to write it all down to share with others so that it would never be forgotten.

"I hope you enjoy reading these memories as much as I enjoyed writing them and that you will be able to cast your mind back to relive that time in your life."

Other books about Melton Mowbray