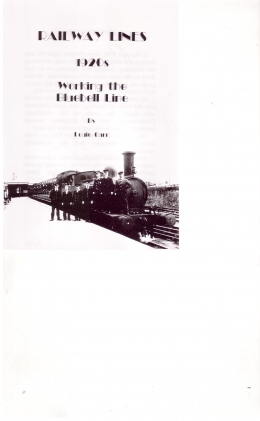 In the year 1992, Harry Preston, agred 89, was living in his own house, with his wife, and doing the shopping, cooking and cleaning, as he had done for the later years of his retirement. He had given up gardening when it became too much, but he kept it and the outside of the house tidy.

As weariness began to overwhelm him, he fell into the habit of recalling, with great bitterness and anger, the years of his childhood. Conversations with his daughters became restricted to this theme, and it ruined his sleep.

One of his daughters urged him to write down his memories, and she eventually succeeded.

After a wretched childhood came a few stable years of working on the railway, growing up and settling down. From handwritten notes, Louie Carr has transcribed her father's recollections into the third person. The railway years were full of interest and change, and gave Harry an abiding, if regretful, love of steam.

Other books about Shepshed