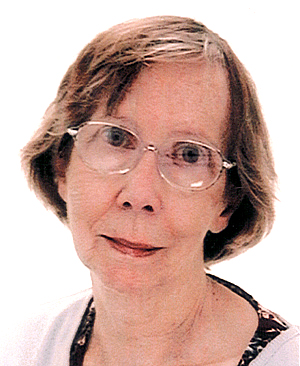 Louie's first efforts were two simple explanations of library organisation, which she published herself, one of which Dewey Decimal Classification for beginners is still available from herself. She is struggling to make direct communication with Amazon UK where second hand copies are offered - with the wrong details! She recently succeeded in purchasing a second hand copy from USA!

Fairly late in working life, Louie decided to improve her qualifications as a librarian and studied for a degree. Her dissertation was based on local history in Huddersfield. The local newspaper asked to see some extracts and asked her to change the academic style of writing to an informal and topical approach. The result was a series of four articles in the Huddersfield Daily Examiner, for which she was paid! Over the next few years a few more articles on local history were published in local newspapers and two articles were accepted by academic journals. This lead to being asked to take part in a documented Staff Development Project with lecturers at a Polytechnic School of Education. There was no pay for the latter, but her report did sell, the profits going to the institution.

Meanwhile occasional poems were published in anthologies. The writing is its own reward, and one feels obliged to buy at least one copy of the book. Louie's poems have appeared in twentyfour anthologies.

Over many years and into retirement she persuaded her father to make notes of his long and varied life. Long after his death she produced Railway Lines from which the Loughborough Echo published seven articles, as they are local history. In 2008 the publication of Harry: the life and times of a local man 1903-1936 was featured in the Loughborough Echo.

Attempts at fiction have not yet lead to success.

Born in 1903 in Normanton Hills, near Sutton Bonnington, Harry Preston lived in and around Loughborough all his life. Compiled by Louie Carr from Harry's diaries and notes, this tells the story of his … [more about book reference 293]

In the year 1992, Harry Preston, agred 89, was living in his own house, with his wife, and doing the shopping, cooking and cleaning, as he had done for the later years of his retirement. He had given … [more about book reference 210]