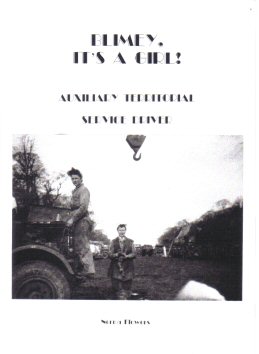 The date was 10 July 1942 and the sun was shining brightly as I crossed the street, wearing my green and brown tweed suit and carrying a suitcase. Approaching was a soldier I knew from dances, and when he saw me and smiled he said, "You're out early. Where are you off to? On holiday?" I shook my head and said, "No! Into the army." His face dropped as he said, "Oh, you poor kid," and then he followed that up with, "Well, good luck, anyway." I parted from him thinking, "that's a good start."

After a long and tedious journey, I arrived at York, where I waited for an hour for a connection to Harrogate. There I found several other girls milling about, and we were rounded up into lorries and told to hurry up, as we hadn't got all day.

Through the town we went and up a little hill to Queen Ethelberg's School. We were to be the first intake, the units having been relocated from Fulford Barracks, York.

We were hustled into what appeared to be a shed, with trestles and clerks recording details. "Name?" "Date of birth?" I told her and waited for her to look up but no - not even "Happy Birthday" and I thought. 'No sense of humour.'

Then, it was into the main building to the refectory, a long white room with tables covered with oilcloth on which were plates containing one slice of bread and butter, a dollop of red jam. a piece of cheese and a slice of cake. Whilst I was figuring out what to do with the cheese, a north country girl explained it was customary to eat cheese with cake.

Then, overall-clad girls came carrying large enamel jugs. "With or without?" "Without what?" "Milk?" "No sugar?" I couldn't remember when I had last had milk or sugar, so I settled for no sugar, and so began a lifetime of unsweetened milky tea!

From there, we were hustled to the Stores, where we were kitted out. Vests, white, ATS use of; knickers, khaki; stockings, khaki; pyjamas; prayer book; Housewife (a small, white cotton bag with tapes and used for mending material. I was fortunate to receive a matching jacket and skirt (to be worn 16" from the ground) in a good quality serge. At the time. Utility material was coming into use and was very coarse. I kept that uniform throughout my service, even though the cuffs had leather bands and the skirt was practically threadbare.
Loaded with masses of uniform in a kitbag, we were then taken to what was called a "Spider," a long corridor with long rooms on either side. Facing down the room were two beds, one each for the corporals, and we found our suitcases on the other beds, together with a label.