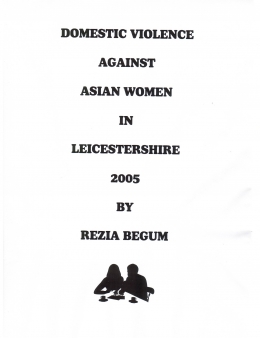 This study examines the subjective experiences of Muslim and Hindu women in Leicestershire who have suffered domestic violence. It is based on in-depth semi-structured interviews with ten Asian women and self-completion questionnaires completed by sixty women victims living in refuges. The guiding research questions are: age, marital status, religion, identity of the abuser, period of the abuse, forms of abuse, involvement of the police, family member awareness, agencies approached for help, frequency of medical assistance, state of mind of the abuser, thoughts of leaving and reasons for not doing so.

The study makes use of both Primary and Secondary data. Primary data include semi-structured interviews and self-completion questionnaires. Secondary data are drawn from books and recent journal articles dealing with domestic violence against Asian women in the UK. Statistical reports from a variety of organisations are also used.