Wings Over Wellesbourne - Volume One - Over Seas Only 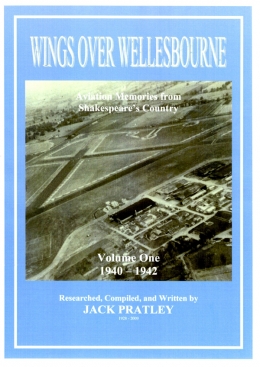 This book is the result of a lifetime's research, and recollections, by my late father Jack Pratley

For many years my dad passionately gathered and recorded information about Wellesbourne Mountford Aerodrome, and was always excited to receive any correspondence about 'The Airfield' (as he up to call it) to add to the collection he was putting together. There are countless letters from ex-service personnel (or relatives of) that were stationed at, or who had flown in to, Wellesbourne Mountford at some time in its history as a RAF station. With the contributions of photographs and other artifacts that these people kindly donated to him. a tale unfolds of what went on, many years ago, to those of us who may have forgotten about these times.

My dad had assembled twenty A4 lever arch files packed full with information about aviation, not only relative to Wellesbourne (originally designated as Number 22 Operational Training Unit) and its two satellite stations - Atherstone and Gaydon, but in the Warwickshire Shakespeare County area as well. He also had files on the other local airfields at Snitterfield, Shenington Long Marston Honiley, Baginton and so on; but deliberately their stories are not covered in this publication. (In mentioning this Shenington/Edge Hill airfield played a small but significant part in the development of the Whittle Jet Engine - but that's another story!)

While sifting through this vast body of work in ' to format my father's book, I decided to split the publication into two volumes; mainly due to the mass of information that was available for the first couple of years, and to add a bit of balance.

This book, Volume One, tells the back-story of the airfields evolution in 1940. and with the assistance of the station's Operations Record Book plus my father's research and recollections, journals the milestones, achievements, and the losses that took place up until 31 December 1942.

Volume Two chronicles events from January 1943 onwards, which includes other is of the airfields history - circa 1950's and 1960's; when Wellesbourne was host to the R.A.F's Number 3 Glider Training School, School Of Photography, School Of Education, The Airfield Construction Branch, and to Number 9 Advanced Flying Training School; and not forgetting to mention the official re-opening of the airfield on Friday the 13th of March 1981 by HRH Prince Philip - the Duke of Edinburgh on behalf of Smith Aviation Services.

Wellesbourne Mountford airfield came in to existence due to the Second World War, (as did many other airfields) and it was in that period where my dad's passion for the place firmly rested, For him it was at this point in time when the airfield was its most alive (and most interesting) as he had live through this period as an enthusiastic young lad. War is far from a glorious occasion it is fought mostly by young men and women who have no real connection with the politics involved, other than to serve their country. Contained within our pages we discover service personnel in their teen or early twenties, killed in action, or killed while on training exercises and all very upsetting for those left behind having to pick up the pieces after their loss. It was a tragic waste of human life but these people died for our freedom. My dad wished to honour their sacrifices, and dedicate Wings over Wellesbourne to them.

At this time of writing, some thirty years after its re-opening, the airfield still thrives as a light aviation centre for pilots and students alike. Wellesbourne is home for amongst others, Warwickshire Aviation, Heli Air, ground worthy Vulcan XM655 and the Wellesbourne Wartime Museum - operate by volunteers of to Wellesbourne Avis Group (WAG)- which my dad had been a member of from its very first year.

As mentioned, the pages in this book contain contributions from many people and organisations from around the world who all kindly donated and memories for dad to use so he could tell the story of Wellesbourne Mountford Aerodrome which he had done many times up until he died suddenly while in preparation for a 617 (Dambusters) Squadron function held at St Peters Church Wellesbourne, in aid of the Bomber Command Memorial Appeal. The event included a dinner, and talks by RAF veterans Squadron Leaders Tony Iveson and Lawrence 'Benny' Goodman, plus an exhibition ' of pictures and photographs.

My dad was preparing to display his history of Wellesbourne airfield collection, but died on eve of the fundraiser. Although passing away less than twenty-four hours earlier, the collection was displayed for the thousand or so visitors to view, and over the two day event ï¿½5,000.00 was raised for the appeal. I know dad would have been in his element had he been there.

Chapter 3
For King and Country

Chapter 6
A (Not so) Bitter End

Other books about Warwickshire