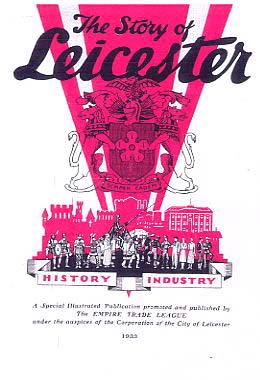 A special illustrated publication by The Empire Trade League.

"The Story of Leicester" - THEO. FEILDEN - Director General of The Empire Trade League -1933

"The Story of Leicester" it is my privilege on behalf of The Empire Trade League, to present to the world a survey of the progress, achievements and position of one of Britain's most remarkable cities.

I believe that what is set forth in this publication will suffice to convey a comprehensive picture of what Leicester stands for - in its civic, industrial, commercial and social life - as one of the bulwark towns of the Empire.

Here is a city which, in spite of acute trade depression, has pursued an even course, has refused to be beaten, and has responded to every variation of the economic barometer with astonishing promptitude and energy. In consequence of this spirit Leicester has secured for itself the distinction of being one of the world's two most prosperous cities.