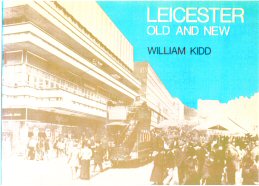 In relating the past to the present, the old to the new, in terms of pictures, full account must be taken of the fact that the city of Leicester has a very old foundation; how old, historians of different ages cannot agree. Medieval historians attributed it to King Lear (844 B.C.) enshrined in immortality by Shakespeare. Geoffrey of Monmouth, 12th century historian wrote of King Lear (or Leir, as he spelt it): "He built upon the River Sore, a city called in the British tongue Karleir, in the Saxon, Leircestre".

Modern historians discount Lear as legend and are unanimous that Leicester was founded by the Romans, during the occupation of Britain in 43 A.D. Near the banks of the River Soar where the ancient Briton tribe of the Coritani had their encampment, they created Ratae Coritanorum, a walled city of 100 acres with forum, a public baths, shops, residences and a basilica (or town hall). Today nearly 2,000 years later evidence of what they built, uncovered by the archaeologists, can be seen clearly in outline, more clearly in fact than any of the remains of the succeeding civilisations of the next 1,000 years - Angles, Saxons, Danes, Normans.

It is to Roman Leicester that we first go to look through the eyes of the artist and the cameraman, at the changes that have taken place in old and new Leicester, great as the temptation was to start at the point where one hundred years ago modern Leicester began its most dramatic strides to 20th century eminence - the Clock Tower area from which radiate, like the spokes of a wheel, all the main roads of the city. The Clock
Tower area was opened up in 1868 and in 30 years from the 1871 census Leicester's population exploded from 95,000 to 211,000. To service this expansion, new roads, schools, homes (30,000 of them) and public utilities had to be hustled up - and in their path much of the old town crumbled. Traffic and transport multiplied and diversified. The effect on historic Leicester can be seen in the contrasting pictures presented here. Every effort has been made to photograph the modern scenes from the same viewpoint but some had disappeared altogether and others involved taking to the tower block, and in two cases, the air, to secure the true perspective. The emancipation of the Clock Tower area was followed by the opening of The Newarke and the widening of High Street at the turn of the 19th century. In modern times the creation of St. Nicholas Circle and the Southgates Underpass virtually completed the destruction of Old Leicester.