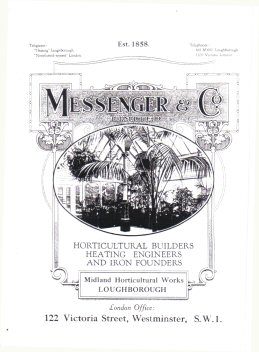 It is now about 35 years since the famous Loughborough works of Messenger and Co. were established, and perhaps there are few works of any kind in the Midlands that have exercised such an influence on the prosperity and reputation of the town in which they are situated. In modern times the cultivation of flowers, exotics, etc., has become a distinctive feature of our civilisation and daily life, and there are few who can afford it, who have not their pretty conservatory, etc., to brighten and ornament their cottages or mansions. As for the latter it may be said that the conservatory and hot-house forms one of the most attractive and important features of the town or country mansion of the wealthy, and no care or expense is considered too great to make these accessories as perfect and as completely adapted to their surroundings as modern art and science can effect. In connection with this branch of decorative architecture the firm of Messenger and Co. has gained a pre-eminent reputation at home and abroad, and, in the perfect adaptation of their structures to all kinds of architectural styles, and their complete equipment in every detail, there is no flrm that has done more to elevate the science of horticultural building. The works at High Street are very extensive, and comprise spacious workshops for all kinds of woodwork for greenhouses, conservatories, etc. The work of preparing the various designs, and of framing the woodwork, is carried on here on an extensive scale and under experienced supervision. The metal department and fitting shops are equipped throughout in a very complete manner, with modern machinery for drilling, shaping, and putting together the various iron parts, and a large staff of experienced men are employed.

This firm were the inventors of the now well-known Loughton Boiler for heating small greenhouses. The boilers are so designed that when they are fixed, although they are inside the hothouse, they can be stoked from the outside, an arrangement which needs no special words of recommendation. Many thousands of these useful boilers have been sold. Messrs. Messenger and Co. have recently, that is during the past six years, opened a capital foundry on the Ashby Road for casting the iron work for greenhouses and appliances for hot-water apparatus, etc., such as hot-water piping and similiar work. In this department, viz,, heating, the firm take the premier position, and, having given special attention to this branch for many years, they have arrived at such a degree of scientific exactitude in the matter that they can guarantee success in every part of the work. All kinds of sockets, syphons, cross pieces, bends, vapour troughs and similar parts aremade by the firm in their own works. We hope to have the privilege of giving our readers a more detailed description of some of the specially interesting branches of the work done by this famous firm of horticultural builders, who have made the name of Loughbough known throughout the United Kingdom and the Colonies; but, for the present, we will content ourselves with saying that the works at High Street and Ashby Road are worthy of the reputation they have gained, and that, owing to the enormous demands made on the resources of the firm in recent years, there seems every probability that further enlargement, at least in High Street, will soon be necessary. There are about 200 hands constantly employed in both the branches, and under the energetic and experienced administration of the courteous manager, Mr. Brooks, the organisation and general arrangements are such as to render Messenger and Co.'s works the first of their kind in the kingdom.