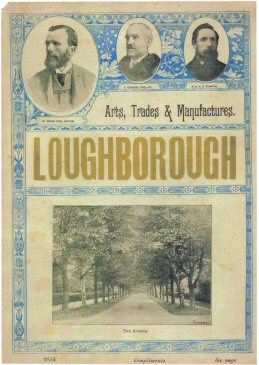 An extract from the book:

When we had the pleasure of visiting Messrs. Taylor's world-famous bell foundry the other day, we could not help thinking that, if the late Edgar Allen Poe had had the advantage of inspecting the establishment, and being informed of the various interesting particulars connected with its history, he might have added another very striking verse to that poem in which he has so beautifully crystalized the poetry and glamour associated with bells in general. Messrs. Taylor's foundry may be looked upon as the home of English bell-founding. The Taylors are representatives of one of the oldest houses of bell founders in the kingdom, their ancestors having succeeded to the ancient firm of Neweombe. Watts, Eayre and Arnold, and the business is at the present time being conducted by the fourth successive generation of Taylors, a circumstance without precedent in the history of bell-founding, and one which gives them a fair claim to be regarded as the oldest family of bell-founders in the world. When we add that their achievements have been as remarkable as their history, and that they have from time to time been entrusted with the founding of the most noted rings of bells at home and abroad, it will be seen that their foundry is one of no ordinary character. During the last quarter of a century, Messrs. Taylor have made a record, the like of which has never been equalled. Their handiwork is to be found in all the principal cathedrals, churches and public buildings in Great Britain. The peal of twelve bells in the north-west tower of our national cathedral - St. Paul's, London - were cast and supplied by Messrs. Taylor and Co., in 1872. It was of these bells that Lord Grimthorpe - then Sir Edmund Beckett, Bart. - wrote in the course of a letter to the Times newspaper:- "On the whole, this (St. Paul's) is unquestionably the grandest ringing peal in England, and therefore in the world." Messrs. Taylor also founded the bourdon bell, known as "Great Paul," which hangs in the south-west tower of the Cathedral, and is the largest bell ever cast in the United Kingdom, weighing no less than 16 tons 14 cwts. 2 qrs. 19 lbs. To have accomplished such work as this, places Messrs. Taylor and Co. in the very fore-front of their profession. We might go on citing instance after instance in which their services have been called into requisition. At Worcester Cathedral, Edinburgh Cathedral, Manchester Town Hall, the New Post Offices, Adelaide, South Australia, Bombay University Buildings, Preston Town Hall, Christ Church Cathedral, Canterbury, New Zealand, Halifax Town Hall, the Royal Exchange, London, Rochdale Town Hall, and the Cathedrals of Lincoln, Chichester, Wells and Salisbury, to say nothing of hundreds of churches, halls and public buildings in almost every part of the world their bells have been supplied. The list of single bells, peals and chimes, cast by them since 1858, varying in size from "Great Paul" downwards, would fill a book. In fact it is almost impossible for a person to stand in any part of England on a Sunday, from which the ringing of bells made by Messrs. John Taylor and Co. cannot be heard, and they are chiming daily in saeh remote parts of the earth as Burmah and Madagascar. To look from afar on the comparatively quiet little town of Loughborough, one would certainly not expect to find it the centre of such wide-reaching business operations. But a visit to Messrs. Taylor's works quickly bears evidence to the fact. Approaching by way of Freehold Street, we come upon the main portion of the premises which is built in a quadrangular form, and extends about 100 yards up Cobden Street. The front of this range of buildings, formerly occupied by the offices and stores, was unfortunately destroyed by fire in June of last year, and is now in active process of re-erection. To the rear is a large yard, flanked on all hands by the various workshops, including fitting, tuning, carpenters' and other shops, and on the opposite side of Cobden Street, with a long frontage to Freehold Street, is the foundry proper. The process of bell-casting is an operation surrounded with considerable interest. The bell is first of all designed on paper, the shape and dimensions being properly specified. From this drawing, what is known as the "crook" is constructed and centred upon a pivot.