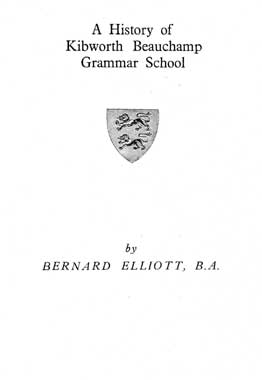 "Happy is the nation which has no history", we are told: and, in view of the wearisome chronicles of battles, murder and sudden death which sometimes pass for history, we can sympathise with the sentiment. But happy is the school whose traditions are firmly rooted in past centuries. At Kibworth Beauchamp many generations of pupils have been proud of our long history, and now, thanks to Mr Bernard Elliott, we can also boast of this short History. It will be a great encouragement, as we strive to ensure a worthy future for the School, to have this survey of the many fluctuations in its fortunes, and of those who have served it well.

I have already had many happy days at Kibworth, but none happier than the day when Mr Elliott unlocked the great chest which contains our documentary treasures and thereby unlocked for me the door into our fascinating past. His enthusiasm was infectious, and, as together we pored over the records - many of them three centuries and more old, and many containing names still well-known in the village and the School - we felt that other people would be glad to share our interest and pride.

In view of the high tribute that the author so rightly pays to my predecessor, it has been suggested that I ought to point out that Mr Bernard Elliott is not related to Mr John Elliott; their sole connection lies in the fact that for some years they worked happily as colleagues in the service of this school.

Other books about Kibworth