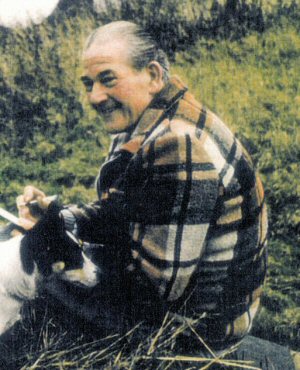 Sometimes an artist's work is not recognised until after his death. This is also so in the case of Ron Morris.

Some years ago now his wife approched me to produce a book of poems that he had written over a number of years as a tribute to her late husband. She gave to me a box containing loose pieces of paper, each one carrying one of his poems, and at the bottom of this box as a manuscript of about a hundred pages with the title 'Loughborough's Own Fox Cover'. He had mentioned this book to his friends and family members some time in the past but no-one had ever seen this manuscript before I produced a book from it. It was at this moment in time, having never met Ron, that I realised how caring and thoughtful he was.

Ron had worked at Mansfield Hosiery in Loughborough for many years as a union representative caring for other people and their problems. In this book on his walks with his dog around the fox cover he befriends the animals that dwell there and tells how he cared for them through the four seasons or the year. This most discriptive book is truly a part of the late Ron Morris.

book reference 113": Loughborough's Own Fox Cover. A nature story through the seasons of the year

One man and his dog walk the cover every day, where they befriend the birds and animals. With his descriptive writing, Ron brings this true story to life, taking us through the seasons of the year - … [more about book reference 113]

TALKING BOOK!
One man and his dog walk the cover every day, where they befriend the birds and animals. With his descriptive writing, Ron brings this true story to life, taking us through the seasons … [more about book reference 328]